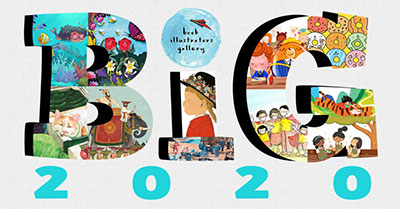 Carolina Ballester holds a MA in Political Science from the Madrid Complutense University and university degrees in Chinese and Arabic languages and cultures from the French National Institute of Oriental Studies (INALCO). After a few years working as a translator, she was appointed cultural attaché at the Consulate of Spain in Shanghai. Since 2013, she is an international programme manager for the Shanghai International Children’s Book Fair. She leads the book fair publishers’ fellowship programme and is in charge of inviting international children’s writers and illustrators to take part in the fair’s programmes. She organises the exhibitions, runs an illustration residence, collaborated in the organisation of the Bologna Illustration Exhibition tour in 2018 and acts as a consultant for the Chen Bochui illustration exhibition and collection. She lives and works between Shanghai and Madrid, Spain.

Priya Kuriyan is a children’s book writer-illustrator, comics maker and chronic doodler. She has directed educational films for the Sesame street show (India) and the Children’s Film Society of India (CFSI) and has illustrated numerous children’s books for publishers like Tulika Books, Penguin, Scholastic and Hachette to name a few. She has contributed to Indian comics anthologies like Pao, This Side That Side, Eat the Sky Drink the Ocean and First Hand 2 (an anthology of non-fiction comics). She collaborated with the writer Devapriya Roy on a graphic biography of Indira Gandhi for young adults published by context, an imprint of Westland books. In 2019, she won the 'Big Little Book Award' instituted by the Parag initiative of Tata Trusts to recognize her contribution to children’s literature in India. She lives and works in the city of Bangalore and in her spare time makes funny caricatures of its residents.

Mira Widhayati graduated from Bandung Institute of Technology’s Visual Communication Design. As a freelance illustrator, her career started from illustrating short stories for children magazine, Bobo. Mira is a member of Kelompok Pencinca Bacaan Anak (Society for the Advancement of Children’s Literature) and was sent to Bratislava in 2015 as one of Indonesia’s representations for UNESCO-BIB Albin Brunovsky Workshop. Until now, she’s still illustrating picture books and also finds joy in storytelling.

Alfredo Santos is publishing manager for South East Asia of Room to Read, an international non-profit organization that promotes literacy and gender equality in education. He has conducted children’s book author and illustrator workshops in the Philippines, China, Indonesia, Vietnam, Cambodia, Laos and Honduras and a number of books developed in these workshops have won international book awards. He is also an award-winning writer and education specialist and holds a Master of Education degree from Harvard University.

Paula Pang is an illustrator based in Singapore. She draws to make new discoveries, to tell a story and to connect with people. She gathers muse from her curiosity about life and weaves it together with her quiet, whimsical and mischievous nature to create a world where the impossibilities are made possible. Her works have been told to be whimsical and witty with a touch of softness. She chanced upon a chance to illustrate her first children’s book Chocolate Bunny in 2011, which led to other publishing opportunities.

Darel Seow is a visual storyteller who illustrates the tales of the natural world through his unique brand of wry wit and whimsy. He believes in the draw of storytelling as a means of engagement, creating experiences that simultaneously excite and educate. Particularly interested in museums and culture, he has worked with art, cultural and educational institutions to encourage learning through the power of imagination and play.

Ben Lai is a multidisciplinary designer in the toy, publishing and entertainment industry, a picture bookmaker and an advocate of play. He draws inspiration from things that enable people to appreciate their relationships with our surroundings and people and he is always curious about how play can make a difference.