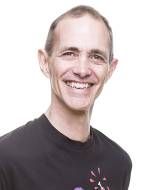 Andy Griffiths is one of Australia’s most popular children’s authors. Together with illustrator Terry Denton, their Treehouse Book series has sold over 10 million copies, won 90 children's choice and book awards and is published in more than 35 countries. The books have also been adapted for the stage with sold-out and highly successful seasons in Sydney, Netherlands, New Zealand and US. A passionate advocate for literacy and an ambassador for The Indigenous Literacy Foundation and the Pyjama Foundation, Andy was awarded the Dromkeen Medal in 2015 to honour his contribution to Australian children’s literature.

All sessions by Andy Griffiths: