This is the site for AFCC 2015. Visit the latest festival site.

Live English interpretation will be provided. The synopses and timings for the Country of Focus' sessions can be found here:  Writers & Illustrators Conference – Day 2 & 3.

In her twenty years of illustrating, Cai Gao has won numerous and varied book awards. In 1996, she was heralded as the nation’s most outstanding young editor and in 2000, she was named as China’s most outstanding children artist. Apart from her work, she is in the creation of picture books. Before she won the National Children’s Book Illustrations Excellence Award for her book The Seven Sisters, she wrote The Little Mermaid, King Lear, Gan Jiang Mo Ye, Sixth of June, Invisible Leaf, Fairy, Peach Blossom Spring Story, and The Fox Spirit of the Waste Land, just to name a few. The Fox Spirit of the Waste Land won the 14th Bratislava International Children’s Book Fair (BIB)’s Golden Apple Award in 1993. In 1996, Cai Gao was invited to join the panel of judges for the first China Children’s Picture Book Award, the Little Squirrel Award. In 1998, she was invited by Japanese IBBY, Japan-China Cultural Exchange Association, to participate in the China Original Picture Book Artist Exhibition organised by the Tomohiro Museum and the Azumino Art Gallery. In 2000, she was selected to be part of the 34th Bologna International Children's picture book illustration exhibition selection committee. In 2002, the exhibition of her work Utopia Story was first on display at the Japan tour and published for the Japanese Gospel Hall bookstore. 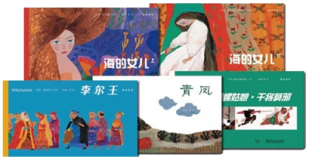 After 30 years of development, China has achieved its unprecedented golden era in children’s publishing trade. In 2014, the China market has shown a 10% growth; this anticipates it will continue to rise in the next ten years. In all various picture book markets, China possesses the largest growth among countries.

The regulation of the national policy on education, and the tireless efforts of the community folks, amongst others, in promoting reading, are the key points of the rise in the number of people reading in China. With the growth of outstanding children’s authors and the soft power of their literary works, they have become the torch bearers of the readers. These authors include Cao Wenxuan of The Grass House and Dingding Dangdang; Yang Hongying of Diary of a Little Cat; Tang Sulan and her title Stories of the Foolish Wolf; Zhang Zhilu and her book Beibei the Firebolt; Sun Youjun with his work The Rustling Adventure; Qin Wenjun and her work Jared Boy and Jammah Girl, etc. The authors not only produce their works, but also cultivate new authors in the trade, for instance, Tang Tang, Zuo Xuan, Sun Weiwei, Zhou Jing… The teeming group of authors constitutes the intelligence guarantee; they cover various styles, topics, and even areas of their works, and formed a sumptuous children’s literary scene. China has 6 authors being nominated for the Hans Christian Anderson Award. The Bing Xin Children New Literary Award and National Children’s Literature Award held every three years are also recognising quality authors and works in China.

Currently, publishing houses have been establishing writers’ workshops like the Wu Meizhen Workshop, and the Cao Wenxuan Literary and Art Center. They publish authors’ works in full copyright, and also lead the authors to a new pattern of self-operation. The China Children’s Reading Committee is taking charge of leading publishing houses, authors and the whole trade to the international market, for example, to attend the annual Bologna Children’s Book Fair. In the new tactics of packaging and marketing, using different languages and culture perspectives, China’s publications have entered different markets; the world is now able to read Chinese contents. China is working hard on the breakthrough of geographical limitations. Although the children’s publication is said to be a contents industry, the technology is equally crucial. Besides paper publications, children’s books can also be disseminated in various forms, such as e-books, AR techniques, etc., to achieve a new publishing value. Children’s books are not limited to the conventional selling platforms, such as the nationwide Xinhua Bookstore, campus bookstores, or private bookstores; they also utilise the advantage of the network, media and various platforms, to perform a multi-channel marketing. Currently in China, both online and physical bookstores have equal share of the sales.

It is considered late for children’s publications to kick off in China, but due to exceptional publishers and the force of great authors, it is becoming an up-and-coming team in the international market. Quality works are not only nourishing generations in China; their widening influence is spreading to Asian nations and is becoming the bridge to build cross-cultural communications and friendship.