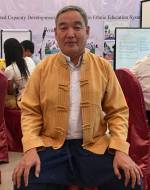 Sai Parn Hein hails from the Shan state and has authored and translated numerous books in the Shan and Myanmar languages such as Children Poems, and People Centralized Projects in Myanmar. He illustrates and writes primarily to raise awareness of difficult and problematic issues for the rural Shan community, an ethnic minority in Myanmar. Sai has also composed many Shan children's rhymes, which are now widely used in literary education for Shan children.

All sessions by Sai Parn Hein: