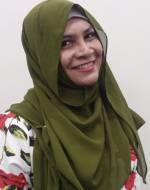 Zulaihabe is a Senior Principal in PPIS Child Development Centre has shown her leadership capability that secured her centre the National Board's School Heritage Champion Award in 2017. The efforts were already translated through the Malay Mother Tongue curriculum implementation and environment set up such as a Culture and Heritage Room. She has also successfully led some parenting workshops about Malay Mother Tongue Language learning for pre-schoolers.

See all sessions by Zulaihabe Talip