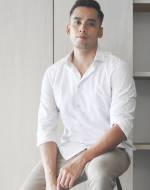 Khairudin Saharom’s  journey in children’s book illustration began with What Sallamah Didn’t Know, a heartfelt story written by Sharon Ismail.  He is a firm believer that illustrations have the ability to not only connect the reader visually to the text, but also trigger the senses and capture emotions that are true to the story. He has been using drawing as tool for communication even till today in his work as an architect. Khai has also conducted classes on how doodling can help improve the command of language.

Khairudin is also a familiar face in the media, having hosted many television programmes for both local and regional networks.

See all sessions by Khairudin Saharom