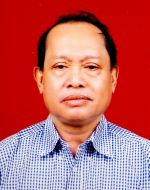 Kadek Suartaya was born in Sukawati-Gianyar. Kadek began pursuing his interest in puppet-painting art, gamelan art, dance art and performance art from an early age. Kadek also studied art formally in the School of Art. In 1991, he became a lecturer in the Indonesia Art Institute Denpasar. He has performed in Europe, US, and in various countries in Asia. Art performances, for which he served as an Art Director, have been shown in Bali, Jakarta, Bandung and Yogyakarta.