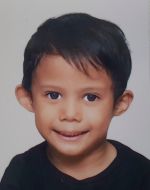 Ayden Farish is a student from Henry Park Primary School. An avid reader whose favourite books include Star Wars, Geronimo Stilton and the Goosebumps series, Ayden is also passionate about the Performing Arts. He has appeared in two feature films where in one, he played the principal character of a twin in a horror setting. He has also appeared in numerous television dramas in Singapore and Malaysia.