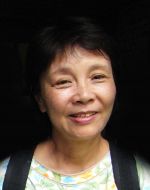 Born in Tokyo, Yumiko Sakuma worked as an editor before becoming a freelance editor, translator, writer, and a professor of children’s literature. She has translated more than 200 children’s books into Japanese, and her work has received many awards including the Sankei Juvenile Literature Publishing Culture Award. She is also a researcher of African literature, and runs a project promoting African children’s books in Japan.

See all sessions by Yumiko Sakuma