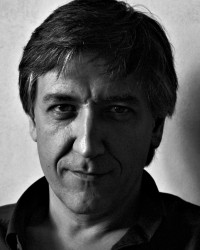 Javier Zabala is one of the most outstanding illustrators in Europe. He has illustrated more than 80 books of poetry and fiction for adults and children, some written by himself. His books have been translated into 17 languages and received many international recognitions, including two Honourable Mentions in the Bologna Ragazzi Awards. He was shortlisted in the Andersen Award 2012 and is the current Spanish Candidate for the Andersen Award 2014. His work has been exhibited around the world.