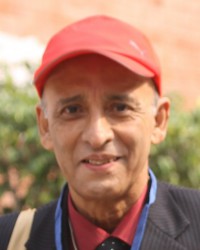 Arup Kumar Dutta is a full-time, internationally acclaimed author. Credited with creating “what is veritably a new genre of gripping fiction set in India”, Arup Kumar Dutta's 17 juvenile adventure novels include The Kaziranga Trail, Oh Deer, Footprints in the Sand, The Crystal Cave, and The Boy who became King. His books have been translated into German, Japanese, Russian, Italian, Hungarian, and Czech while three have been made into feature films. Two of his books are featured in the “Literature of the World” series brought out by the Japanese newspaper Asahi Shimbun, along with those of Satyajit Ray and Ruskin Bond, and he features among the three Indian writers included in the New York publication 1001 Books You Must Read Before You Grow Up. Among his awards are Shankar’s Award, Journalist Welfare Foundation Award and Kamal Kumari National Award. On February 6th, 2014 he was honoured by the Association of Writers and Illustrators for Children (AWIC), New Delhi, the Indian Chapter of the International Board of Books for Young People (IBBY) for his contribution to children’s literature in India.